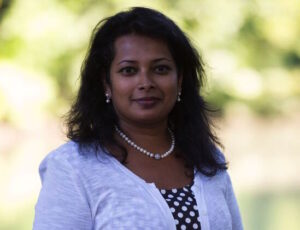 Professor Raja’s research contribution is in the field of artificial intelligence, specifically in the study of decentralized control and reasoning in software agent systems operating in the context of uncertainty and limited computational resources.  She directs the Distributed Artificial Intelligence Research (DAIR) Lab. Current projects include advanced machine learning methods for prediction of preterm birth and optimizing route choice in traffic networks. She has taught several courses in Computer Science, Artificial Intelligence, and Engineering. Professor Raja’s has co-chaired several workshops in Artificial Intelligence and served on program committees of many AI-related conferences and workshops. She is co-editor of the MIT Press book titled Metareasoning: Thinking about Thinking and co-author of Cognitive Science: An Interactive Approach published by NSS Press. She is recipient of the 2006 UNCC College of Computing Essam El-Kwae Student-Faculty research award and Best Paper Award at the 2010 IEEE Intelligent Agent Technology Conference. In 2019, Crain’s New York Business named Professor Raja as one of 75 “Notable Women in Tech” in the Greater New York City area. As of 2020, she is the CUNY faculty ambassador on a National Council for Artificial Intelligence in Finance.

This entry is licensed under a Creative Commons Attribution-NonCommercial-ShareAlike 4.0 International license.

Need help with the Commons? Visit our
help page Send us a message

Built with WordPress | Protected by Akismet | Powered by CUNY